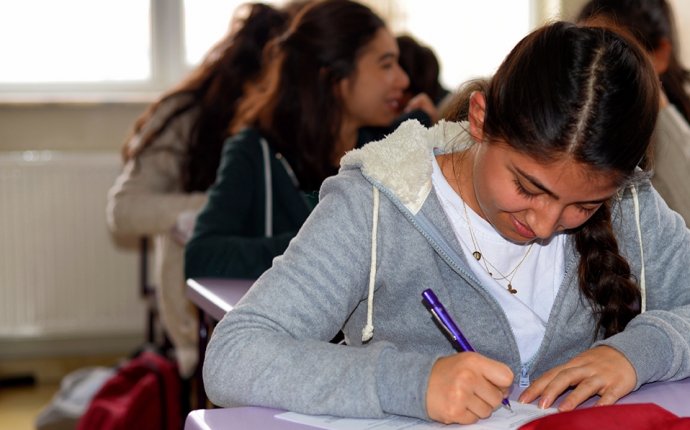 The year I started teaching seventh- to twelfth-grade English in Minneapolis, Prince launched his song about urban ruin, "Sign o' the Times." That song was an apt musical backdrop for the lives of my students, most of whom lived in poverty and challenged me daily. That year also afforded me the opportunity to be assaulted with a stone, two chairs, a Rambo knife, a seventh-grade girl's weak jab, and dozens of creative swear words. Fortunately, classroom order improved when I learned that successful classroom management depends on conscientiously executing a few big strategies and a lot of little ones.

A hypnotist's first induction technique often involves directing subjects to focus on something they're already doing. "Feel your eyes getting tired" is a good opening, because everybody's eyes feel tired all the time, but we don't notice until someone points it out.

Teachers, like hypnotists, can string along a series of requests by asking students to do something most are already doing, then waiting for 100-percent compliance, and finally issuing another directive, etc. It's better for teachers to say, "Point your eyes toward me" and wait for compliance, instead of saying, "Stop talking, turn around, turn to page 237, take out a pencil, and head your paper with 'Geology Frame.'"

2. Keep your consequences as minimal as possible.

When a rule is broken, assign the smallest consequence possible and see if that gets the job done. Don't use up big consequences too fast.

For some, being thrown out of the room for backtalk has a lower social cost than appearing dumb in front of peers. Assigning appropriately difficult work (which often means differentiating) eliminates that risk.

Most disruptions occur before the bell rings and between activities. "Silent 30" was my signal for all students to clear their desks and sit silently within half a minute. A class reward occurred after 30 were completed successfully. My kids loved how visitors witnessing the routine would drop their jaws in surprise.

5. Anticipate problems and be creative.

At the beginning of one year, my middle-grade students charged into class like Mel Gibson and a thousand Scottish warriors. To solve the problem, I asked my kids to line up for class outside my door with their left arm against the wall and a foot of space between them and the person in front of them.

To enter class, each child had to answer either a content-related question or a random dumb question like, "What type of weapon would you use to battle Aquaman?" The dumb questions kept the line entertained. After answering, they were directed to take a seat, quiet as moonlight, and follow instructions on the board. Students talking or violating any of the protocol were sent to the back of the line.

I used to send a positive note home to every student's guardians, and that note included a magnet (100 cost about $9.00) to encourage its placement on the refrigerator. I also left complimentary voicemails. That way, parents and kids saw me as an ally.

1. Show students that it pays to behave.

At the end of tough classes, I'd daily give out two raffle tickets - one for academic effort and one for good behavior. After writing their names on the tickets, kids dropped them in a jar. On Friday, I randomly drew two student names - both received candy bars.

Even when you feel like the the entire class is misbehaving, there are always some kids following directions. Punishing the class as a group only incites further resistance.

The goal is to get students interested in the teacher's agenda in lieu of misbehaving.

To interrupt a class of aggressive complainers, I cued up Katrina and the Waves on my CD player. When the first grumbling complaint occurred, I raised my palm and played "I'm walking on sunshine, woooah / And don't it feel good!" Everybody laughed. Another kid started to whine until I pressed play again. Bigger laughs. After that, complaints rarely occurred.

Instead of starting class braced for conflict, make yourself look for things to delight in: that Serena knows everything about Detroit hip-hop or that your thermos of Intelligentsia Coffee is three quarters full.

6. Ramp up your enthusiasm.

There's no downside to being 20 percent more enthusiastic.

Students sometimes miss the obvious. Say, "This class makes me glad that I teach."

Never cueing students to meet your emotional needs is an important adult boundary. And one of life's paradoxes is that people who never obsess over being adored are often the recipients of adoration.

When students get kicked out of Katie Riley's ninth-grade English classroom, she always tells them that everything is forgiven and that the next day will be a fresh start. When a student commits a felony, he sees Ms. Riley sitting in the courtroom gallery. That's all he needs to know.

"Do you want to do this assignment in class or as a take-home quiz?" "Should this project be group or independent work?" Choice increases students' buy-in.

Say, "Yesterday, the noise was at an 'eight' during work time. Let's shoot for a 'five' today."

If you have a chaotic class, keep things predictable. Also post the day's schedule.

If students are confused and lost, don't brush over it. And when you've sent a student out of the classroom, say, "That makes me sad and frustrated, but let's get our brains focused back on the third math problem."